A postscript from Christy...

I walked before I crawled. Then my motor neural wiring brought me down to crawling as movement exploration, and here is when my home practice started. As a child I followed my mother around as she cleaned and cooked; I imitated her actions in abstraction, hoping to entertain her as she toiled. By the time I was a teenager, I had taken over the basement as a studio, and everyone in my family apologized if they walked in on my dancing. Home practice doesn’t just support public practice—it is the most important thing we can do to develop as artists. It is a place where we create our own economy for our work and are only limited by our commitment.

One night, in late 2013, Rowena Richie admiringly mentioned Cheryl Strayed’s Wild for Strayed’s goal of walking the Pacific Coast Trail for 100 days. Rowena said she wanted to do 100 days of something. I offered to create 100 days of prompts to support Rowena’s curiosity.

The 100 days score is simply that: a list of 100 prompts to spark movement and creative (all of the prompts can be done in any media) investigations. The prompts are designed to take place in your apartment, in rented studio space, outside in both urban and green environments, in cafes—anywhere you can make them happen.

The goal is to support home practice in direct and tangible ways, to direct practice towards exploration and away from production, to examine our first choices and immediate instincts, and to invite in influence from other media as a means of enriching creativity. The score can be used for compositional, improvisational, and/or physical-mental conditioning ends. Most importantly the score values autonomy and the freeing of exploration from productivity.
Posted by Erin Mei-Ling Stuart at 10:54 AM No comments:

Six months after I started, I have reached the end. It looks like this: 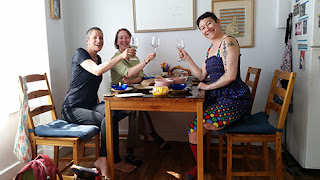 I'm done. Done! The notion hasn't made itself at home just yet. It's visiting. What's the period at the end of this run on sentence that started back in November? I'm not ready to wrap it up in a tidy bow. It's all too weird. I'm forced to resort to metaphor.

The few times I involved other people in this practice gave me such a sense of relief and support. It was the best way out of my heady spirals and well worn movement paths. There is something here about being open to influence, and the benefits of outward focus.

Having a daily practice makes me happier, for the most part. This particular practice was not always daily for me, clearly. But when it was daily-ish, it had a real effect on my general well-being, despite the artistic angst that popped up at regular intervals.

Yeah, I'm kind of neurotic and angsty about my creative life - surprise! Christy reframed this by suggesting that I am discerning and critical, and that those are important and useful qualities. Perhaps. I am still interested in connecting to the pleasure in dance and performance making.

The suggestion (for the entire project) to "try not to make anything" was the source of some struggles for me. Turns out that Ro's instructions didn't include that, and she was happily making things, and then reveling in the shedding days. I wonder how things would have been different without that concept.

Also in "what would it have been like if..." category: I wonder how it would have been if I hadn't been documenting this whole thing publicly. I'm glad I did. I liked putting all of this raw, unfinished stuff out there into the world. And there was something nice about running into someone, and they would mention reading one of the posts. Surprising, and a little strange, but nice. Maybe it's validating? Like, this is actually happening!

I loved the prompts that had to do with attention - improvising with the senses, observing people.

Space/location was a huge deal. So, so much dancing in my domestic space. It felt cramped a lot of the time, but more comfortable than being out in public space. When I felt stuck, I wanted to blame my bedroom. On the flip side, I'm sitting on my bed now writing this, and the room bears the traces of all that dancing. This is at once my private space, and a public performance space, through the magic of youtube. I like the vulnerability in that. Here I am. Here is where I sleep. Here is my stuff.

Public space was always complicated. That's one of the I'm left wanting to work on or figure out. How to claim space. How to bring creative process into public space, and be comfortable doing it. How to not worry about looking like a freak. How to dance like no one is watching when no one else is dancing and someone might be watching. Or, how to dance for an accidental audience the way I dance for an intentional audience in "real" performance.

Drawing doodley things while listening to music has become one of my favorite ways to relax, and the rediscovery of that came at least partially from this process.

I think it was good that I didn't see any of Ro's 100 days when I started mine. It was good to get onto my own path, without any pre-conceived notions. But seeing her beautiful book (which is the main repository of her documentation) today made me think that it would have been inspiring to see her responses to some of the prompts while I was still in the practice. Not the prompts I hadn't gotten to yet, but some that I had done. She approached things in ways I didn't even think of, and I think seeing that would have opened up even more possibilities and shaken things up. It comes back to where I started - the joys of influence.

And now having come full circle, I think I'll leave it here. 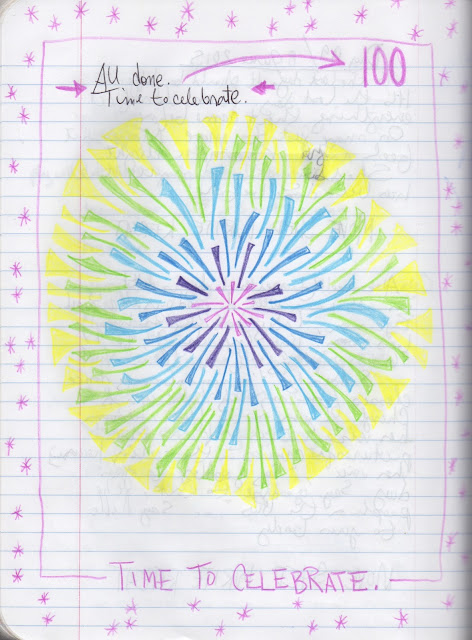 Posted by Erin Mei-Ling Stuart at 11:55 PM No comments:

Or, move just to move. Move what feels right. Kinesthetic delight. Shedding the thought "this has been done before."

A sense of melancholy is setting in. It has been a week of goodbyes all around.

Suddenly I'm remembering dance classes from my early 20s with Cheryl. Lying on the floor, looking up at the picturesque cracks in the ceiling and hearing her voice: "Say goodbye to your day. Say goodbye to work, the people on the bus, your family... Say hello to your body."

All done. Time to celebrate. 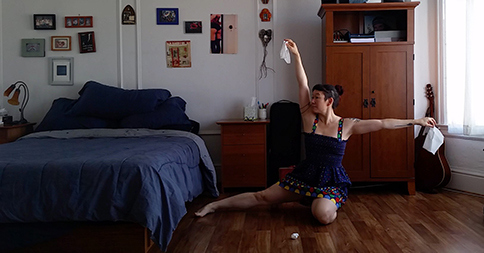 Posted by Erin Mei-Ling Stuart at 10:13 PM No comments:

#98 Run all material with breath support and experiments with phrasing

Special guest stars Chris and Aura joined me for this one. We did away with the notion of saved material and ran an improvisation with these ideas:

The idea of phrasing got lost, and we sometimes forgot about breath support. There ended up being a kind of transitional zone between the periphery and the center.

Influence was my favorite part of this. We talked afterward about how improvising with other people releases us from the usual worries about whether our movement is interesting/habitual/whatever. Pay attention. Respond. Play. 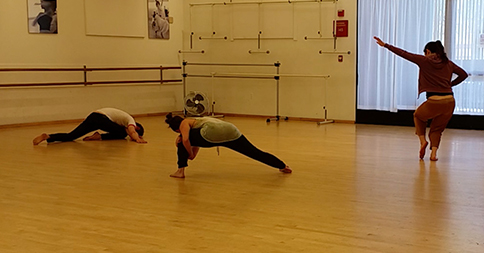 Posted by Erin Mei-Ling Stuart at 1:57 PM No comments:

# 97: Run all material with qualitative fluctiations in:
flow (muscularity)
weight (strong or light)
space (uni- or multi-focus)
time (slowing down or speeding up)

I released my fear of phrase, at least for the day. Resurrected a little ditty from last week, added on a bit, and then did it about fifteen times in various ways (two are below). I was glad I did. Digging into the same material again and again with the fluctuations in quality is satisfying. You stop worrying about the particulars of the material and whether it's good, but find some nuances and possibilities.

Did this for two rounds of about 10 minutes each (with special guest star Sam on guitar). Video from most of the 2nd round was lost to insufficient memory, and I'm quite sure that's when all the good stuff happened. This is the last version from the first round, and the first version in the second. 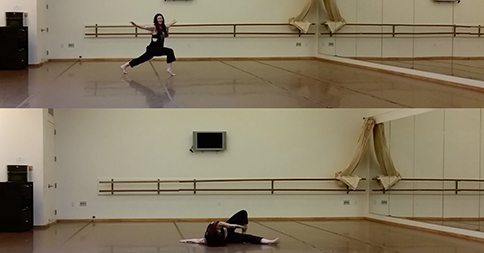 Posted by Erin Mei-Ling Stuart at 4:51 PM No comments:

A long stretch of beach and ocean seemed like the right sort of spatial support for this one. My spatial intent was to revel in the space, to stretch out, to move along the horizon. 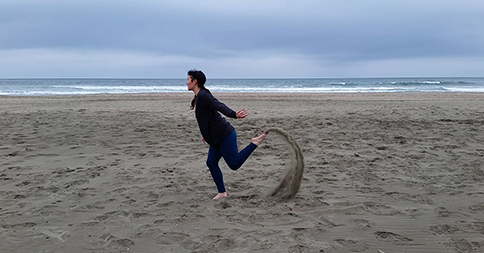 Posted by Erin Mei-Ling Stuart at 8:15 AM No comments:

Still not sure what I'm dress rehearsing for. Decided to think of it as a dress rehearsal for presenting some kind of summary of this whole project. I went through all of the writing and pulled small bits from every prompt into one document, with the idea that this is something I could read aloud. Read some of it aloud.

I think I just turned this into an exercise in editing.

Ideally, there would also be a very edited video with something from every video and drawing that would play, perfectly timed, with the reading.
Posted by Erin Mei-Ling Stuart at 4:55 PM No comments: